Ursula Bagdasarjanz was born in Winterthur, Switzerland, to a mother who was herself an outstanding violinist. The seeds of Ursula's musical talent were sown in the cradle, or, as she herself believes, were bestowed as a gift to accompany her through life. Her father, Samuel Bagdasarjanz, who was of Armenian and Swiss extraction, was born in Romania, whence his family emigrated to Switzerland. Through her mother, Margrit Weiss, born in Switzerland, of Austrian and Swiss descent, Ursula learnt at an early age to express herself on her instrument. In 1944, at the age of ten, Ursula Bagdasarjanz gave her first concert (Beethoven Romance in F major). Her teachers were Aida Stucki in Winterthur, Switzerland (1944–1953), Marcel Reynal at the Conservatoire National Supérieur de Musique in Paris, France (1953–1956), where she was awarded the "Premier Prix de Violon" in 1956, and Sándor Végh in Basel, Switzerland (1957 and 1958). She took masterclasses with Joseph Calvet in Paris and Max Rostal in Bern. At the time Ursula Bagdasarjanz was taking violin lessons from Aida Stucki, the latter was herself a student of Carl Flesch, one of the most famous violin educators ever. This was a stroke of luck: as a child, Ursula Bagdasarjanz had already had the chance of familiarising herself with a unique method of work for violinists, the Carl Flesch scale system.

In 2000, another Aida Stucki student, the violinist Anne-Sophie Mutter, wrote the introduction to Eric Rosenblith's new edition (published in English) to Carl Flesch's book on "The Art of Violin Playing".

Another violinist having done extensive work on the Carl Flesch's works was Max Rostal. He published a new, revised and broader edition of the scale system in 1987 and passed his in-depth knowledge of the standard works of Carl Flesch on to students attending his masterclasses.

As both soloist and a chamber musician, Ursula Bagdasarjanz pursued an active concert career. She did much for the composer Othmar Schoeck. She performed a full range of his violin works, including recordings of all his violin sonatas, accompanied by Gisela Schoeck, the composer's daughter. 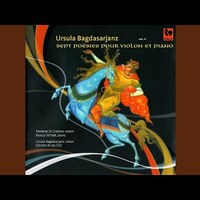